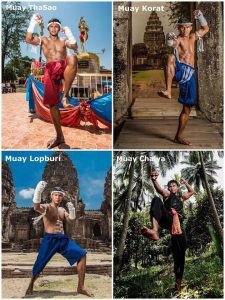 Since each style had it’s own strengths, a complete fighter was said to: “Punch Korat, Wit Lopburi, Posture Chaiya, Faster Thasao”. Muay Thai only came about because of the peoples love of the art so it was developed into a ring sport. The lethal brakes and death strikes were removed and rules were applied to the sport because of the serious and sometimes fatal injuries that resulted during bouts.
Muay Thai is Thailand’s national sport and a martial art. Often called or known as “Thai Boxing” outside Thailand. Fighters use punch, elbow, kick and knee to fight.

Reign of Rama I

By Fitstop Admin on 23 September 2021
Pra Puttha Yord Fa Chulaloke King Rama I was a Muay Thai enthusiast from an early age, training and traveling to watch matches throughout the kingdom. As the legend goes, in 1788, two brothers from France came to Thailand in search of boxing or fighting competition. One of them was a fighter of some renown […]
Read more

By Fitstop Admin on 23 September 2021
Muay Thai is referred to as “The Art of Eight Limbs”; and using eight points of contact the body mimics weapons of war. The hands become the sword and dagger; the shins and forearms were hardened in training to act as armor against blows, and the elbow to fell opponents like a heavy mace or […]
Read more

What is Muay Thai or Thai Boxing?

By Fitstop Admin on 23 September 2021
Muay Thai or Thai Boxing is the national sport and cultural martial art of Thailand. It was developed several hundreds of years ago as a form of close-combat that utilizes the entire body as a weapon. Today its definitive origins are debated by modern scholars, as much of the muay thai history was lost when […]
Read more
Log In
Register
BOOK TRIAL
hello@fitstop.sg
+65 9663 5588
Open Whatsapp
Need help?
How can we help you?